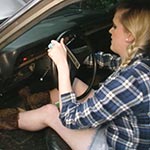 She wants your help to get her old Coronet started so she can sell it.  She gets behind the wheel and starts spinning it over while you watch.  She’s giving it plenty of gas but it’s not catching.  Her size 10.5 boot forcefully pumps the gas throughout most of this video.  You check out under the hood for a bit but nothing seems out of place.  You’re enjoying her struggle and eventually hop in the backseat to get a good view but Evian inquires why you’re back there.  She figures you’re liking the show so why not put her thespian skills to work.  She suspects you’ve done something to the car just so you could have this pedal pumping show but plays along regardless.

One thought on “Evian Gives You a Broadway Pedal Pumping Show”