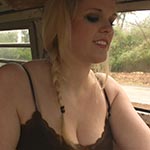 Evian comes out to do some hard revving in the Bus on this rainy day but it doesn’t want to start.  She puts her big, size 10.5 foot to work pumping the squeaky gas pedal to get the old engine started.  As she gets into the revving, she starts getting this wicked look of joy on her face.  She is having a good time making this Bus scream and beg for mercy!