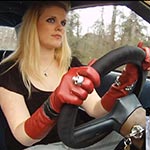 Evian is going to take us for a drive in the Monte Carlo wearing some long leather gloves and a pair of leather over-the-knee boots.  She has some trouble getting the Monte Carlo started.  Evian has a very firm and aggressive pumping style which causes her to flood it out a bit and becomes the reason the car won’t start.  She drives gripping the steering wheel with both leather clad hands and has this look of a woman who doesn’t want to be messed with.  The car stalls on her once (she got lucky! lol) and it doesn’t take much to start again but she does drive a bit more aggressive after the stall, to remind the car not to mess with her!