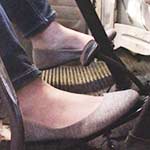 Vivian rides co-pilot with Fallonn on her first trip driving the old 1971 VW Bus. Fallonn is no stranger to manual transmissions but the Bus does take some getting used to. She drives around as Vivian films the action while the chat a bit. You can see Vivian’s peep-toe heels in the video while she films.