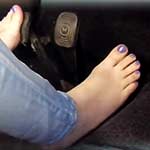 This is the first attempt of this video with Fallonn. She’s taking the Bug out and Vivian is riding shotgun. She cranks the Bug with her gray suede ballet flats on and after she gets it started, she kicks them off to drive with just her bare feet. The video starts out as a main view from the backseat and a picture-in-picture view of Fallonn’s feet working the pedals but Vivian had to go and hit a button on the phone that controls that camera and stopped it. It isn’t until the very end of the clip that you hear Vivian say that she messed it up. lol It’s not a big deal since there’s some great over-the-shoulder footage of Fallonn banging through the gears and keeping the little engine’s rpm’s high throughout the drive.

One thought on “Fallonn Driving the Bug Barefoot with Purple Toes”