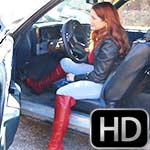 The video picks up with Fallonn and Vivian in the driveway with the hood of the Monte Carlo up and Fallonn trying to get it started. They are trying to head out but their car, which was running fine earlier, just won’t start. Scarlet is then seen driving by them as she’s leaving and says, “Good luck getting it started.” with a devilish little laugh.
“What did she mean by that?” Vivian wonders to Fallonn…did Scarlet do something to their car??

One thought on “Did Scarlet Sabotage Fallonn & Vivian??”