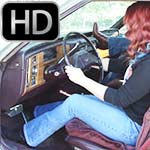 This is a quickie clip that starts out with the girls discussing who has to go first at trying to start the Cadillac. After a short discussion, Fallonn is the winner, or loser, depending on how you look at it. She gets behind the wheel with her black cowgirl boots under jeans while Vivian plops down next to her in her brown cowgirl boots under jeans. Matching boots, different colors.
Fallonn pumps the gas a bunch and spins it over…and over…and ov-VROOM!! Wow, it started up! It seems as if Fallonn has the magic touch with the Cadillac. To test that theory and to bet a drink at the bar tonight, Vivian says that Fallonn can’t turn it off and start it again. So, she turns it off, waits a moment and turns the key to start it and VROOM! Vivian goes double or nothing but this time, Vivian gets to flood the car. She reaches over with her brown boots and pumps the gas a bunch. Fallonn turns the key and VROOM!
Looks like Vivian has to pony up some drinks for Fallonn tonight.

One thought on “Fallonn & Vivian Debate Who Starts the Caddy First”