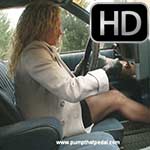 It’s lightly snowing and Gem is leaving for work.  She gets in the Monte Carlo and starts cranking away at it, pumping the gas pedal to get the cold engine to start.  It sputters a little bit, she’s close!  She gets a nice big back-fire from the car during the process.  I guess it doesn’t want to go anywhere.  Not long after that, the battery starts getting weaker and weaker before finally dying entirely.  Now she’s gotta find another way to work!

One thought on “Gem Cold Starting the Monte in Hose, Gloves & Peep Toes”