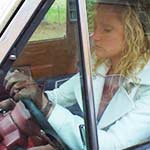 She’s dressed all cute but it’s cold out, so she scurries to her car and tells you to get in. She gets situated, slides the key in and turns it to ‘On’ then gives the pedal a few pumps and turns the key…whrr whrr whrr whrrrrrrr…no start.
She tries again…whrr whrr whrr, “Come on.”
Yeah, doesn’t look good for her getting her car started for your date tonight. She tries for a while but ends up killing the battery. So she suggests taking your car and asks for the keys before getting in the behind the wheel. She can’t get it started either and drains that battery as well.

One thought on “Gem Cold Cranking in Boots & Gloves for Date”