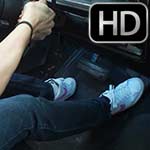 Gem Trying to Move the Coronet in Nike Sneakers

The Coronet has been neglected for quite some time.  It’s raining and Gem has come over to try and get the Coronet cranked up and moved.  She has to battle with the car to get it running.  She revs the piss out of it when she gets it started the first time but tries too soon to move the car and it stalls out.  It takes a bit to get it going again and this process goes on for a few minutes until the car is warmed up enough to actually not die when it’s put in gear.  She rolls into the throttle to get the old car to back up but it just struggles.  She’s flooring the gas, pumping the gas pedal hard to try and get it to move but no luck, the engine just has no power.  Sure enough, the car ends up stalling out and won’t fire up again.