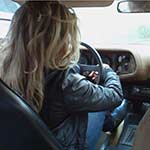 We’re back with Gem, riding along as she drives through neighborhood in her loud, old Camaro.  She whips it around in a cul-de-sac and most girls haven’t figured out yet that turning the wheel all the way to lock mixed with low idle or getting on-and-off the gas will cause it to stall.  She finds this out the hard way and coasts to a stop in front of all the houses.  It takes a bit to get it started up again, she almost thought she was going to be stuck there.  She revs it up and goes back home.

One thought on “Gem Cold Starting & Driving the Camaro, 2 of 2”