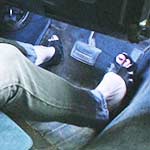 Gem Starts & Revs Up the Monte in Peep Toe Heels

This was the first clip I filmed of Gem and it’s also the last clip I have of her to post. I gave her a quick run down of what to do and what to expect from the car then turned her loose. She gets in, gets the car started and revs it up for a bit before ending the video. Not much of a story, just a girl playing with the pedals in an old car.