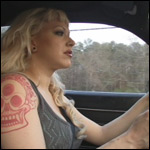 This is the last clip series of Gia Nova.  She’s dressed in some skin tight, silver leggings and a pair of gray over the knee boots as she battles to start the Coronet and then takes it on a drive.
The first half of this clip is her getting into a big time argument with the Coronet.  She puts her booted foot to the pedal to try and make it start while the Coronet protests vehemently!  She does end up winning the battle and revs it up slightly before beginning their drive around town.

One thought on “Gia Nova Driving & Cranking the Coronet, 1 of 2”