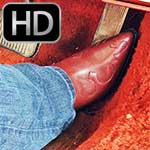 Ginger Cranks Up & Drives the Jeep in Red Boots

First time getting to play in the Jeep but she handles it well. She gets it fired up and takes it for a drive in red leather boots under jeans.