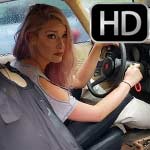 Heidi & Jane Getting Ready for Work & Chevy Issues, 1 of 3

They’re undecided on what to wear and they’re already running behind. Heidi starts piecing together her outfit for the day while Jane can’t seem to even get started on what to wear. Heidi finishes up and tells Jane that she’s going to go ahead and go out to get the car started while Jane finishes up.
It’s rainy and blegh out as Heidi walks to the Camaro. She’s much taller than Jane and it seems that Jane was the last one to drive the Camaro because when she sits down, she can’t even fit behind the wheel. She gets in, slides the key in and spins the engine over while lightly pumping the gas.
“Come on, come on.” she softly says, to which the car just ignores.

Jane comes out of the house finally ready and immediately hears the sound of the Camaro’s engine spinning over.
“Oh no, can she not get the car started?” she says to herself. She just has that look of defeat on her face also and they have barely started the day. It’s gonna be on of THOSE days today, eh fate?

One thought on “Heidi & Jane Getting Ready for Work & Chevy Issues, 1 of 3”