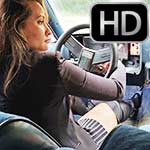 Heidi & Jane Getting Ready for Work & Chevy Issues, 3 of 3

So the last clip ended with them getting the car started and actually have to go to work. Heidi is driving now and turning around she stalls the car out. It’s hard to get started again, sputtering like it’s going to start but floods out and dies when she lets go of the key. She’s begging the car to start for her and after some more tries the car loudly backfires on her. Scares her a bit but Jane is just like, “You a’ight?” and tells her to get back to it. Heidi keeps trying to get the car started but it’s just getting more and more flooded. Jane finally tells her to get out to try it herself because Heidi has flooded it.
“Come on..” Jane softly says to the car as she pumps the gas a few times. She gets it fired up after a handful of tries and revs it up to clear it out.
“I’m just gonna clear it out for a second before trying to drive it. That’s why it kept stalling.” Jane says as Heidi is standing by the open drivers door.

Jane parks the car and as she’s parking it she’s playing out the scenario if they take the car to work, “We take it to work, it doesn’t start and then we’re stranded at work.” Jane tries a few more times and both girls once and for all agree that it’s just not in the cards today.

One thought on “Heidi & Jane Getting Ready for Work & Chevy Issues, 3 of 3”