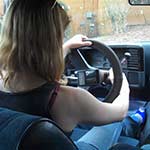 She gets in the car and her boss (you) is already in the back seat, waiting. She apologizes she has to drive you around in this crappy car of hers but she thinks you like it because of all the trouble she has with it. She’s looking at you in the rear-view mirror as she starts pumping the gas. She’s firmly pumping it to the floor a bunch to get it nice and flooded because she wants to give you a show before work. She tries cranking it in short bursts while still pumping it a lot. She looks back over her shoulder after trying for a while and asks if she should give it more gas…what do you think? She keeps pumping, of course.
This goes on for a while until we cut to her point-of-view where she’s talking to herself about how the car is really flooded and you’ve made her pump it way too much! It isn’t going to start now and she’s going to have to get it fixed.
We then view the rest of the video from the backseat where she’s a bit upset that you’ve made her mess up her car and now it isn’t going to start at all! She’s cranking the car, only pumping the gas when she thinks it needs a squirt of fuel. She’s in luck as the car finally clears out enough to sputter and start and she proceeds to clear it out…whew!!