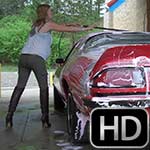 Jamie Lynn Cranks & Drives the Camaro to the Car Wash

Time to get some of that pollen off the car. Jamie hops in, gets the Camaro started and heads to the car wash. She gives it a good scrubbing and speeds home going the long way to try and get the car nice and dry before parking it again. She almost kills us in the process, which I had to cut out because no one wants to hear me squealing like a little girl! lol