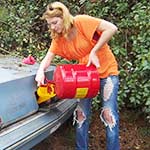 She hops in the old Monte Carlo, starts cranking it to get it started while stabbing the gas a few times as to not flood it. She repeats this a few times but the car isn’t starting. She starting pumping more and more when you see a shot of the gas gauge sitting on ‘E’. She’s looking at to see if it moves and even taps it in case the needle is stuck…nope, it might actually be out of gas. :/ She drains the battery trying to get it started just to make sure! lol
She loads up the two gas cans into the back of the Jeep and fights with it some before it eventually starts. She runs to the store to get some gas and then comes back, pus the gas in the Monte and yay, it starts up!! She pulls it out of the bushes where it’s been parked for a while. It’s covered in debris from some storms we had recently. She gets it on the driveway and revs it up.