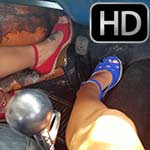 These two are shuffling some cars around in some sexy wedge sandals.. Jewels starts out by firing up the Jeep and moving it. She’s wearing a black dress and blue wedge sandals. As she’s moving it out of the way, we cut to Jane in the old Bug wearing a pair of red open-toe wedge sandals cranking the car up and moving it. After that, it’s a short driving scene that then cuts to them doing some revving.
All of this is filmed POV of just the feet and legs.