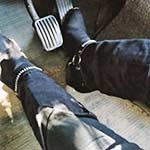 She’s an earlier-riser than me in the mornings, so she’ll sometimes be eager to go play in the cars while I’m still snoozing. She knows where the keys are at. She knows most of the quirks of each car. She knows how to use a camera, so, she likes to go out and play in the cars that are parked her at PTP HQ. This is one such morning of her filming herself going out to the Volvo to see if she can get it running.
Does she succeed?