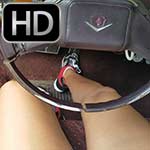 We just moved to our new place and had the Caddy parked in a temporary spot. The moving truck was coming shortly to unload so I tossed the keys to Jane to have her move it out of the way. This is all from her point-of-view in the car trying to get it started but fails.

One thought on “Jane Domino Failed Start Cadillac in Sneakers”