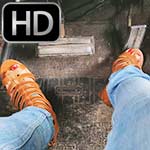 She’s walking across the yard, over the hills and through the woods to get to the old Dodge Coronet to fire it up and move it. She’s wearing jeans with a pair of sexy strappy sandals that are tan in color. Her red toes peek out from the open-toe part of the shoe. She gets to the Coronet, gets in and cranks away on the old dirty thing. She’s cranking and pumping and pumping and cranking in this old thing for a while and it’s sputtering, coughing and chugging while the battery is getting weaker and weaker with each turn of the key.