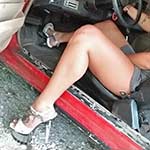 Stripper heels is the best term for these shoes. These are 3″ platforms with probably a 5″ (maybe higher) heel on them. She’s out trying to get the Camaro started but it’s flooded and won’t stay running…oh darn! Lots of teasing and begging as she plays with the gas pedal, getting it crank and crank until she’s gotten the starter to hot and it just ‘thunks’.