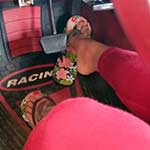 This clip has audio issues.
Jane can’t get her mom’s old 1983 Mustang fired up. She uses it sometimes to help her mom keep it running. When it sits for too long, the battery goes dead or it is a pain in the ass to start…like today. I guess neither of them have started it up in a while and Jane drains the battery trying to get it cranked up.