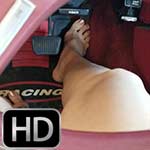 It’s too damn early to be having car trouble…
Jane agreed to take the car to shop this morning but she’s regretting it now that she can’t get it started. Two different views with the first being from her point-of-view and the other being from the passenger side. It sputters on her and teases her like it’s going to start at times but then just conks out. It’s truly a stubborn little engine but she gets it fired up finally and lets it idle to warm up while she goes and gets her cup of coffee.