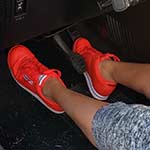 “Good morning sweetie!” Jane says as you come walking into the dining room after just waking up. She tucked you into bed last night and you didn’t think you’d see her until a couple of weeks.
She says you two can go get breakfast in her mom’s car if you hurry and get ready. It will need the battery changed first because she drained it the night before trying to get it started to take you to the movies…remember? It’s okay if you didn’t because she drains this one you just put in. So, after a changing the battery again she tries to start the car. Third time’s a charm, right?