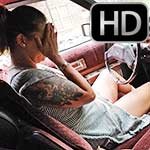 Jane has gotten into the Jesus’ moms Cadillac since her Camaro wouldn’t start in the first clip. After a few tries, the Cadillac isn’t starting either. Jane is wearing her orange wedges but sees an old pair of Miss Johnson’s boots in the car and ends up trying them on.
“Looks like we wear the same size, Mrs Johnson!” and tries starting her Cadillac wearing her boots. Imagine how many mornings she’s had car trouble trying to get Jesus to school and here, years later, Jesus’ sexy babysitter is struggling in the same car wearing the same shoes as her.

One Response to Jane Taking Little Jesus His Lunch Box , 2 of 2