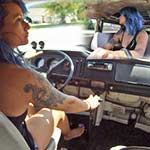 Jane Domino Taking the Bus for a Spin, Strugglin’ Barefoot

She’s taking the old Bus for a drive with 2 cameras capturing the action. One from the back and one looking at her upper body…well, let’s just be honest, it’s just getting a great shot of her boobs in that tank top! lol She has issues with the Bus not idling for her and when she gets to a red light, she finds that it’s being really stubborn about staying running. A whole bunch of cars go around her…yeah, don’t mind the hot girl in a broken-down car or anything!

One thought on “Jane Domino Taking the Bus for a Spin, Strugglin’ Barefoot”