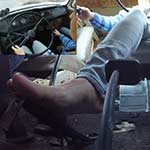 It takes a few tries to get the Bus started, it’s a cranky old thing. She gets it fired up and revs it a bit to clear it out and hits the road. She drives it hard, shifting through the gears pressing the pedals with her bare feet.