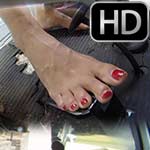 She takes the bus out for a little cruise on this pretty day with those sexy feet all over them three pedals! That low-cut tank top is also something else worth looking at!