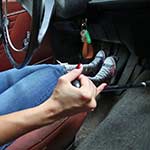 Trying to stretch the Volvo’s legs a bit because it’s been sitting a while. Cranking, driving, stalling, flooded starts and revving are in this clip. Oh and Jane needs more arm muscles to get the parking brake off…lol
These gray knee-high Converse sneakers were sent in by someone and Jane loves them. She had been begging me to let her wear them for a clip, so she got to break them in while working all the pedals in the Volvo, good stuff!