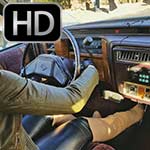 Jane Leathered Up Cold Start & Driving the Cadillac, 1 of 2

She’s a bit anxious trying to get her car started with some guys lingering nearby. She keeps glancing over to make sure none of them are going to try and come help while she keeps uttering words to the car for it to start under breath. “Come on. Come on baby…start!” The car fires and sputters but won’t stay running. Each time she goes to press the gas to warm it up, it keeps dying. It finally floods out and she can’t get it fired up again before the battery dies.
Moments later, after letting the battery sit for a few minutes and giving the engine a chance to clear itself out, she goes to crank it up and is finally able to gently rev it so it’ll warm up some. After it’s gotten a little heat into the engine, she can really warm it up now. She gets the car rocking as she romps on the pedal. She opens the door to lean out so she can hear and see some of the exhaust. She romps on it some more and the car, along with herself, are ready to go. She doesn’t out for a Sunday drive either, she lays into the pedal with her vintage leather boots while gripping the steering wheel tightly with her leather gloved hands. She gives the old Caddy a workout!

One thought on “Jane Leathered Up Cold Start & Driving the Cadillac, 1 of 2”