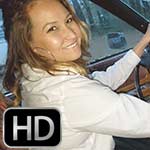 So the Caddy has been having some issues for a while and we haven’t been able to use it much. It’s finally fixed…mostly…and Jane is kinda excited to get it started and take it for a drive. She’s wearing a white button down shirt, leather pencil skirt, sheer pantyhose and black leather knee-high boots. She gets the car going and it’s running a bit rough so she warms it up for a bit before backing up and heading down the driveway. Once she hits the road, that’s when we discover the car has no power. She has to hold the pedal to the floor to just keep up with the minimum speed. When she finally makes it to PTP HQ, she revs it up hard by herself and then at the very end of the video, Vivian hops in for a little action.

One thought on “Jane Domino Awakening the Caddy from Hibernation”