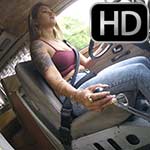 I think she’s just moving the Bus around or ran down the street to get something from one of the cars. A little cranking to start it up, she stalls it some and has to crank it some more then some driving.