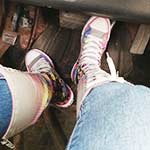 She’s filming herself as she gets in the Camaro, gets it started, warms it up and drives it down the street in some cute knee-high Converse sneakers.