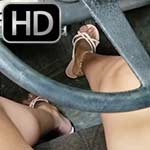 Gotta love them old Chevy engine that don’t want to start up. The Camaro isn’t wanting to start and it takes a while and a good bit of pumping before she gets the first signs of life from the car. A little sputter here and a little there but damn, it’s being stubborn!