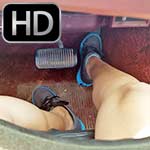 She’s in the gym parking lot about to leave because the facility doesn’t have any running water…again! So she’s going to head back home if she can get the Jeep started. She’s pumping the gas in her black/blue sneakers.
She’s irritated and narrates as she drives the Jeep home, punching the gas out of frustration. She’s trying not to road rage when she gets behind slow drivers…this just isn’t her day!

One thought on “Jane Domino Can’t Work Out Today”