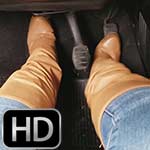 She’s filming herself walking out to the spot where the Renault is parked. She’s wearing tan knee high boots over jeans and a sexy, low-cut tank top. She’s bringing it into the garage because a window was messed up and rain was coming. She gets in, films from her point-of-view as she tries getting the little car started. She ends up killing the battery after a few minutes. The battery is changed and she tries round 2 of getting it started and manages to fire the little engine up. She revs it up to clear it out and pulls it onto the driveway to rev it some more.

One thought on “Jane Domino Tan Boots Moving the Renault, 1 of 2”