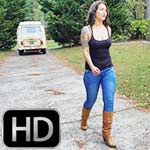 She revs up the Renault a little bit before swapping over to the Bus to move it out of the way. She fires it up, revs it a few times and moves it. She then gets back in the Renault, can’t get it started for a while but eventually gets it running and pulls it into the garage.

One thought on “Jane Domino Tan Boots Moving the Renault, 2 of 2”