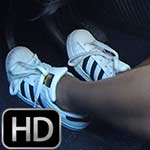 Jane Domino Starting Up the Renault in Adidas Sneakers

The old Renault…it was such a fun little car. Stubborn as shit sometimes too! Jane is picking up the Renault to use it and a couple of different angles shows her cranking, revving and driving it.