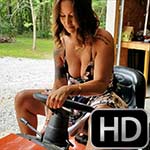 Doing a little rearranging today with Jane. I give her a crash course in using the riding mower. She pumps the pedal of it as she tries to start it just for fun…it’s kinda sexy though, right? She gets the mower out of the way so she can fire up and pull the Bus and Volvo from the shop.

One thought on “Jane Moves the Riding Mower, Bus & Volvo in Platform Pumps”