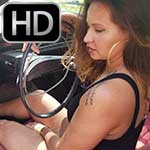 She goes to start the Volvo and not only is the seat not adjusted right but the gas pedal is popped off. She gets out and has to fix it in a classy lady-like fashion! 😉 Vivian just gives a little chuckle as Jane is, literally, ass-up to fix the pedal. lol
She fixes it, starts it up and gives it some good revving to clear it out.