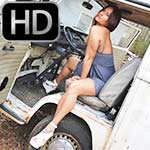 The beginning theatrics of this video are hilarious! She’s being all sultry and sexy, I mean, laying it on thick but her mood gets killed when the battery isn’t connected. Doh!
She gets the bus running and moves it across the yard to do some super hard and sexy revving in these white wedge sandals and her itty bitty little tennis dress.