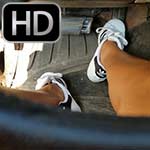 It’s a hot day out and she’s starting up the Coronet, Monte Carlo and Camaro. Once each car gets started, she revs them up a bit to clear them out so they’ll idle on their own. Filmed from her point-of-view the whole time. Lots of thigh and leg shots as well as a gratuitous sweaty boob shot! 🙂