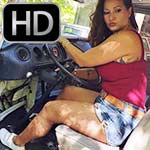 Fun times, fun times!
Cranking, weak battery, dead battery, outtakes, battery changing and stuff like that in this behind-the-scenes clip of the girls trying to get this custom video done in the old bus. Jane is wearing Keds sneakers, daisy dukes and a low-cut tank top.  Jewels is the camerawoman for this video.