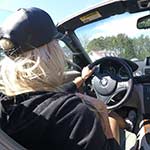 They were anxious to take the BMW out for a spin. It’s a gorgeous day, so a great day to drop the top of the lil car. They’re both wearing sneakers and short skirts on this drive. Some views from the back-seat as well as front dash-mounted views. Testing out what angles work best while putting some miles on the car to see if any of the issues are getting better.

One thought on “Jane & Jewels Topless Sneaker Cruise in the BMW”