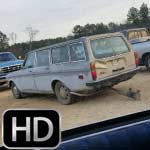 Jane & Jewels Going to Workout But Volvo Breaks Instead, 2 of 2

Jewels is trying to get the Volvo started so they can get it to the shop but it’s not starting…again. They want to get it there before the shop closes….
“Come ooonnnnn!!!!” she’s beyond frustrated now.

She finally gets the car started up and it stalls again but then it starts again. They start moving and as the exhaust drags on the ground both girls just cringe at the sound. Good thing the shop isn’t too far away.

Camera view from Jane in the passenger seat and a chase-cam of them driving with the exhaust dragging on the road. Needless to say,when they pull up to the shop they get some crazy looks.

2 thoughts on “Jane & Jewels Going to Workout But Volvo Breaks Instead, 2 of 2”