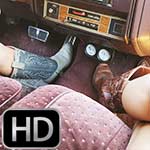 Jane & Jewels Morning Drive to the Shop in the Caddy

Jewels gets the Cadillac started and warmed up in the garage and once it’s running smooth, she backs it out of the garage while Jane helps her navigate the long-ass car. I catch them before they leave to talk with them for a moment and to give Jewels her purse that she forgot. She gets the car turned around eventually and they head off.
Jane takes over at the shop to drive back and when she gets back home, she gives a little booty-showing revving session.