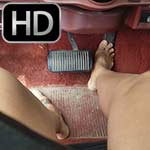 They had a sleepover at Jane’s, since she was holding on to the cars, and they’re up and ready to play a little bit. Still in their pj’s, they go to the garage where Jewels is going to move the Bug out. When they open the garage door they realize they have to move some of the other cars first. So Jewels moves her car while Jane gets in the Jeep and starts it up. She figures since the Jeep started up they should take it for a quick drive down the street and back. Jewels hops in and they go for a spin in the Jeep with Jane hitting the gas with her bare feet and bare legs!

One thought on “Jane & Jewels Morning Barefoot Pedal Pumping, 1 of 2”